As California braces for the impact of relaxed marijuana laws that allow recreational use for adults, several small, financially strapped cities in southeast Los Angeles County and elsewhere are at the forefront of efforts to seize business opportunities — despite pushback from some residents.

[related_articles location=”left” show_article_date=”false” article_type=”automatic-primary-section” curated_ids=””]Elsewhere, the desert town of Adelanto has tried to sell itself as a place for growers with a 30-acre industrial park divided into units that will be sold to marijuana cultivators for $7.5 million each. And in Northern California, Oakland has received more than 100 applications for marijuana businesses under a city program where at least half of available permits will be granted to applicants that include individuals with marijuana-related convictions.

In contrast, under a proposed plan for Los Angeles, marijuana growers and sellers would receive a “certificate of compliance” instead of a business license or permit. Marijuana businesses in L.A. would remain illegal but could operate with “limited immunity” from criminal prosecution if they follow city and state laws.

(In a recent letter to the Los Angeles planning department, City Council President Herb Wesson proposed a new system that would grant legal licenses and permits for marijuana businesses.)

Maywood has already collected more than $90,000 in license application fees for its medical marijuana businesses, including cultivation, manufacturing and dispensary use, according to city spokesman Robert Alaniz. 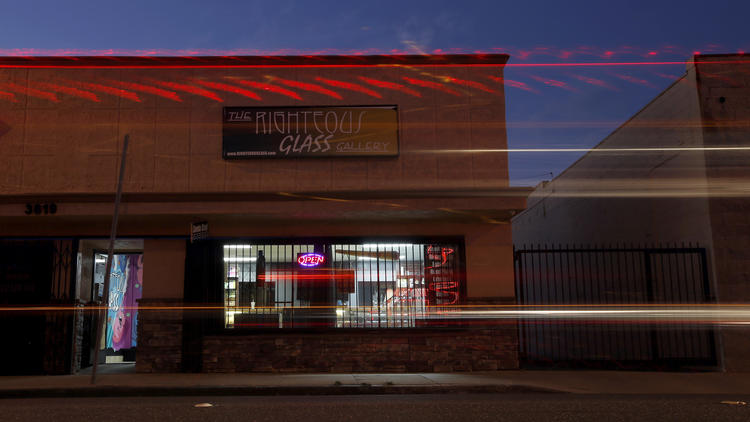 “A small jurisdiction like that could raise tens of thousands, maybe hundreds of thousands of revenue each year by having marijuana dispensaries within their jurisdiction,” said Patrick Murphy, research director of the Public Policy Institute of California, adding that much depends on competition with neighboring cities and the city’s tax on marijuana businesses. “Being first is always good because that means that there’s less competition. You at least have a chance to gain a larger share.”

Murphy said Maywood’s actions could create a domino effect among other small cities.

“Their ability to respond and move pretty quickly is much greater than, of course, a big city like Los Angeles,” he said. “If I’m a small town about the same size and see them do it, that means more to me than knowing that San Jose has done it. That’s not reality to me.”

But Maywood may also be a preview of the challenges for cities small and large of negotiating the contours of a controversial industry without full support from the community. The city has a long history of mismanagement and questionable financial dealings.

A state audit last year said Maywood could face financial collapse, with $16 million in debt that it cannot repay. The predominately working-class city south of downtown Los Angeles came close to bankruptcy in 2010 as well, at a time when it also became involved in a major municipal corruption scandal in the neighboring city of Bell.

Now, many residents and former city officials complain that they’ve had little input in drafting a marijuana ordinance that has undergone several revisions and amendments. They accuse city leaders of failing to address major questions about the costs and benefits of allowing commercial marijuana activities.

Their concerns include the proximity to schools of two businesses approved for marijuana licenses. The property of one of the businesses is owned by the head of the Planning Commission.

Residents also say that the working-class city of 30,000, which stretches just over a square mile, is too small for such enterprises. They have pushed back, collecting hundreds of signatures that sought to force two referendums.

“We have fought hard,” said Elizabeth Bibiano, who gathered petitions at a local school. “I can’t understand how this has gone on, on, on and now we have the permits.”

In an Oct. 25 letter to Maywood’s City Hall, Los Angeles County Dist. Atty. Jackie Lacey admonished the city for failing to provide adequate notice of an August 2016 meeting at which officials discussed repealing a ban on marijuana dispensaries and demanded that it withdraw any recommendations approved at the session. She noted that the meeting was held two weeks before its scheduled date and that notice was not posted until 3:25 p.m. the same day.

The city subsequently revoked the ordinance it passed following the Planning Commission meeting but approved virtually the same plan in December.

Controversy has also swirled around the City Council’s decision in late October to terminate two planning commissioners who had opposed allowing marijuana businesses.

Former commissioners Cindy Lara and Heber Marquez said they believe their dismissals were related to their resistance. 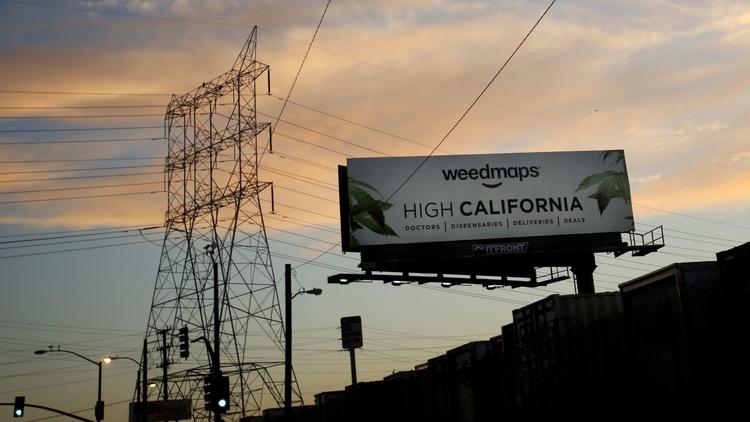 A billboard advertising marijuana products near Maywood. Some residents in the small city are against marijuana dispensaries in the city. (Francine Orr / Los Angeles Times)

“I kept on requesting by emails and by phone calls why I’m not part of it,” Lara said. “I kind of know it has to do with the marijuana. We were the only two people who got kicked out of the planning commission.”

Marquez said he had received few answers about how closely businesses would be allowed to operate near schools, parks and churches.

“My whole argument was, ‘provide this for us so we can see if it’s feasible and possible for Maywood to even proceed with this,’” he said. “They never saw that as a reason to stop and actually look into it.”

Mayor Ramon Medina responded that replacing commissioners was not unusual in a new city government.

The property owner of one of the approved businesses, Corona Sky Inc., is Ignacio Flores, chairman of the Maywood Planning Commission, according to the business application. Corona Sky is on Atlantic Boulevard, about three blocks from a new middle and high school opening in August, and has been approved for commercial cannabis manufacturing. 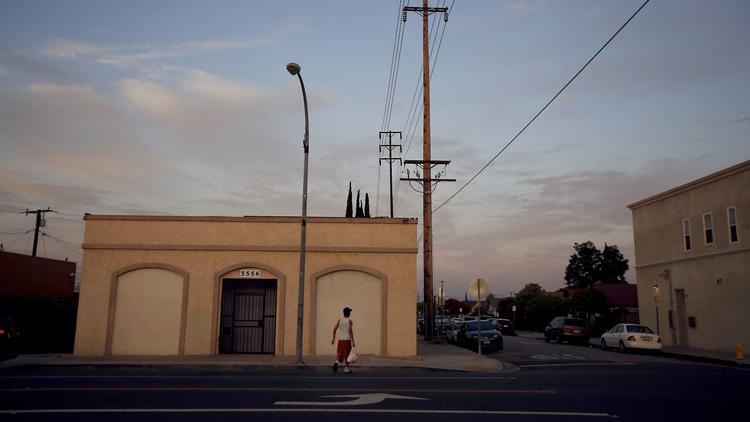 The property owner of an approved pot business, Corona Sky Inc., is Ignacio Flores, chairman of the Maywood Planning Commission, according to the business application. (Francine Orr / Los Angeles Times)

In an email, Flores wrote that “anyone who knows anything about financial and building security for your family knows that real estate is a wise investment,” and added that he purchased the property more than 20 years ago.

The second business, Maywood L’Chaim, located on Maywood Avenue across the street from a residential neighborhood and a block from Loma Vista Elementary School, was approved for licenses to cultivate, manufacture and dispense marijuana.

Maywood’s marijuana businesses must receive a conditional use permit to begin operating, said City Atty. Mike Montgomery, who added that Flores will have to recuse himself when the matter goes to the Planning Commission.

Like other residents, Bibiano said she’s concerned about Corona Sky’s proximity to Maywood Elementary School, which is two blocks away.

“It’s an elementary school where parents walk by with their children,” she said. “We already battled drug problems in schools years ago…Now I’m even more worried because it’ll be within reach.”

Mary Mariscal, a former planning commissioner, knocked on doors with other community members on two occasions to gather hundreds of signatures for a referendum on the ordinance. The city told Mariscal that the first petitions were “moot” because it had revoked its previous ordinance. The second time, however, residents couldn’t gather enough petitions by the deadline. 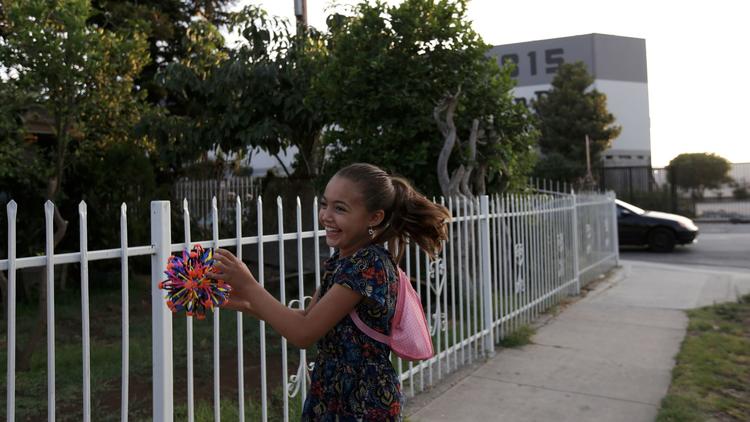 Bella Marquez, 8, plays catch across the street from Maywood L’Chaim, the second business that was approved for licenses to cultivate, manufacture and dispense marijuana. (Francine Orr / Los Angeles Times)

Medina said a review of business license applicants was conducted by an independent consulting group before city staff made their recommendations.

Councilman Eduardo De La Riva, who has voted against the marijuana ordinance, said he received no information about companies that submitted applications other than the two that received licenses.

“I didn’t get to see the application for these two companies that were approved,” he said. “I made that clear to staff — ‘you’re asking us to make a decision with incomplete information.’ I don’t know anything about these companies.”

City officials have touted the potential benefits of the businesses for a city that has long been riddled with — and criticized for — financial mismanagement.

In an email, the mayor wrote that those who oppose the ordinance “are not attuned or sympathetic to needs of our residents who are suffering from various afflictions,” and said that the marijuana business’ revenue would help the city recover from a dire budget shortfall.

In November, voters approved Proposition 64, a statewide initiative legalizing recreational use of pot for adults beginning in 2018. The measure permits cities to assess local taxes on marijuana businesses, but Maywood interim City Administrator Reuben Martinez said that the city has made no revenue projections or determined how it would collect any returns. Calls to the independent consulting group were not returned.

The city’s current ordinance seeks to regulate medical marijuana businesses, despite a June 28 news release touting the new ordinance and that fact the majority of Maywood voters approved Proposition 64.

“With voter-approved Proposition 64, local government has a duty and obligation to regulate this new business economy,” Medina said in the release. “It’s important that we attract the right kind of operators to ensure adherence to city codes and regulations, and to operate in a way that is responsible and respectful of the community.”

Before Maywood adopted its current policy, Marc O’Hara, founder of the political consulting firm Precision Politics who was then a director of a marijuana trade group, met with then-Mayor Oscar Magaña in 2014 to ask him to support overturning an ordinance then in effect that banned marijuana businesses.

O’Hara said he represented a client interested in starting a business in Maywood, and as an incentive, offered to help create a city-controlled nonprofit that would receive $150,000 a year from his client.

“I told him (repealing the ordinance) needs to go before the city council,” Magaña said. “There’s a process that needs to be followed.”

O’Hara acknowledged that the mayor seemed uncomfortable with his offer.

“After my meeting with Oscar, I met with my client and said, ‘this is too hard,’” O’Hara said.

News that the city had approved marijuana licenses surprised some residents, including Manuel Hernandez, who runs Maywood Mini Market across the street from Maywood L’Chaim.

“If they only come to buy the product and then leave there won’t be problems,” he said. “If it becomes a place where they’re hanging out to get the product, like at a bar, it can become a problem.”

Roberto Perez, 35, runs a shop that sells smoking equipment on Slauson Ave. He favors the marijuana ordinance, explaining that the closest dispensaries are several miles away.

“That would be nice,” he said. “A lot of the community has been asking for a dispensary or regular usage place… I haven’t inquired because I wasn’t aware that the city allowed it.”

At a July 12 city council meeting two weeks after the city announced its approval of both businesses, the city amended its latest ordinance, adding detailed guidelines for cultivation, manufacturing and commercial cannabis activity.

At that meeting, some expressed puzzlement over why guidelines were being added after the licenses had been approved.

Lara also drew attention to something that was missing from the city council’s website before the meeting: a copy of the proposed amended ordinance.

“It’s kind of hard for the public to do the public hearing when you don’t have any of this material available for us to speak on,” he said.