SAN FRANCISCO — Free after eight years of federal imprisonment, one of the nation’s most celebrated cannabis convicts came home to California on Wednesday, walking off a United Airlines flight into the warm embrace of supporters — and a profoundly changed world.

Charles “Eddy” Lepp, a defiant 64-year-old Vietnam vet and ordained Rastafarian minister, was convicted on federal felony charges in 2007 for doing something that California now considers completely legal because of the recent passage of Proposition 64: growing marijuana.

Then he vowed to fight for national legalization of cannabis and presidential pardons for first-time nonviolent drug offenders.

“Just because I went to federal prison doesn’t mean I got off the horse,” said Lepp, who will be on drug-monitored probation for five years. “It is still a long, long ride, and I’ll be there when it’s done.”

Supporters revere him as a “Pot POW” in the war against drugs, a man who paid dearly to win the rights that many now enjoy.

“Eddy Lepp is a true marijuana martyr,” said Dale Gieringer of the California chapter of the National Organization for the Reform of Marijuana Laws. Calling him “a true believer,” Gieringer said, “he never once tried to hide what he was doing. His garden was like an act of civil disobedience.”

Medical cannabis pioneer Dennis Peron, co-author of the 1996 initiative that legalized medical use, called him “a hero. He’s strength and hope that you can fight these guys and sometimes even win.” 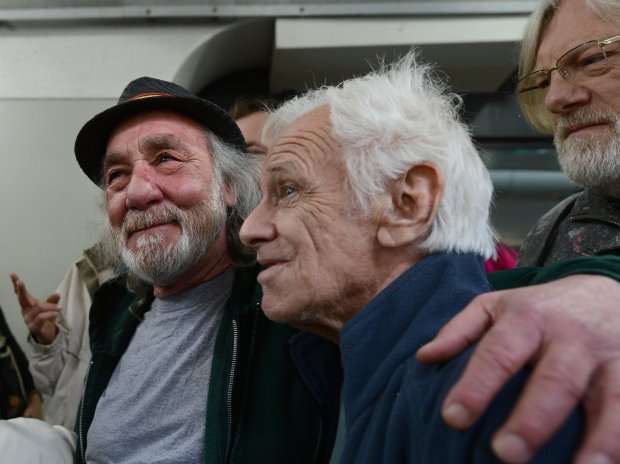 Prosecuted during the tough-on-drugs administration of President George W. Bush, Lepp’s case also represents the tense standoff between state and federal policies — one permissive, the other punitive. While a U.S. appeals court ruled in August that the federal government may not spend money prosecuting marijuana growers who comply with state laws, there are worries that Congress could appropriate new funds.

Proposition 64, approved by voters last month, establishes licenses for commercial growers. Licenses will be issued beginning on Jan. 1, 2018 to small- and medium-sized farms already licensed by local officials. One specific category of license, called Type 5, allows what it calls “large cultivators” with more than one-acre outdoors. But those licenses won’t be available until Jan. 1, 2023.

As a result of his conviction, Lepp lost his beloved Lake County home, farm and cars, which were seized and sold by federal drug agents. He also lost his marriage to divorce and missed nearly a decade of life with family and friends, some of whom died while he was behind bars.

Now, large agribusinesses are predicted to move into the state — doing what Lepp did, only bigger. There is no limit to the sizes of marijuana farms under Proposition  64, according to Steve Lyle of the California Department of Food and Agriculture.

“They’ll be growing more plants than Eddy ever did,” said Lepp’s attorney,  Michael Hinckley, of Berkeley. “And they’ll be making a profit, instead of doing it for religious and medical reasons.”

Lepp grew more than 50 varieties of high-grade marijuana on 20 acres at the Upper Lake farm he shared with his late wife, Linda. Called Eddy’s Medicinal Gardens, it was near the gateway to Mendocino National Forest, about 150 miles north of San Francisco.  He allowed others to grow their own plants on his property.

It was a rural mountainous retreat with several tenants, as well as flowers, trees and fish ponds. Devotees of the Rastafarian faith, they consumed, shared and donated copious amounts of weed, but allowed no alcohol or other drugs.

Most of the harvest went to people who needed it for medical reasons, Lepp said.  He used some to ease his Post Traumatic Stress Disorder, he said. It also helped Linda ease symptoms of terminal cancer.

The outspoken marijuana reformer’s vast crop was in plain view of Highway 20. He considered it legal for medical and religious reasons.

It was reputed to be the largest single medical crop seizure in the United States, with an estimated street value of $18 million.

Lepp went to trial, took the stand, and admitted the farm was his and to what he was doing. While he did not admit specifically to the charges of cultivation and distribution, the jury found him guilty. Only one of the other growers on his farm stepped forward to share responsibility.

“He was brave, very brave,” Hinckley said. “It is very difficult to walk into federal court and admit to violating drug laws. When it came time to step up and take the risk, it was just Eddy.”

He was sentenced to 10 years in prison — the minimum mandatory sentence.

Lepp spurned a plea deal that would have reduced his time behind bars because it would have required an admission of wrongdoing, Hinckley said.

“He wouldn’t say what the judge wanted him to say,” he said. “He believed he was helping people.”

His supporters stayed loyal over the years, sending him emails, money and personal letters. Calling him a “freedom fighter,” the Modesto hip hop band Real One released its song “Eddy Lepp” on Wednesday morning, in honor of his release.

“His tribe has not forgotten him,” said friend Dale Rostamo, who manages the website HerbFolks.org. “Eddy Lepp’s presence in the civilized world during his incarceration has been sorely missed.”

Wayne Justman of San Francisco, who relies on cannabis to ease symptoms of his HIV infection, said: “This is the man that provided our medicine for us. These cultivators are important to us, and they need the freedom to grow. It is senseless to put people in jail for a plant.” 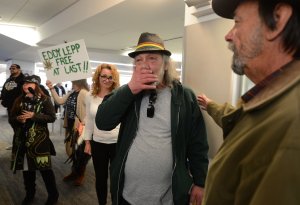 Lepp is not the only California activist sentenced to serve time in federal prison, said Amy Ralston Povah of the CAN-DO (Clemency for All Nonviolent Drug Offenders) Foundation, which seeks clemency for pot prisoners. Others include El Dorado County’s Dr. Marion P. “Mollie” Fry and Dale Schafer, a physician and attorney, sentenced to five years in 2011.  Patricia Albright of Nevada City was sentenced to five years and five months in 2015 for manufacturing marijuana and money laundering.  And many others, especially African-American and Latino men, serve time for mere possession.

Lepp called his sentence, later reduced by two years, “a wild and bumpy ride.” But most fellow inmates treated him “with love, respect and admiration,” he said. And with the exception of guards “who believe it is their job to punish us each and every day,” most guards “knew who I was … and were,  for the most part, not that bad.”

Even in prison, he continued preaching, signing off emails with his own homespun scripture:  “TRUTH. RESPECT ALL. HURT NONE. LOVE ONE ANOTHER !!!!!” 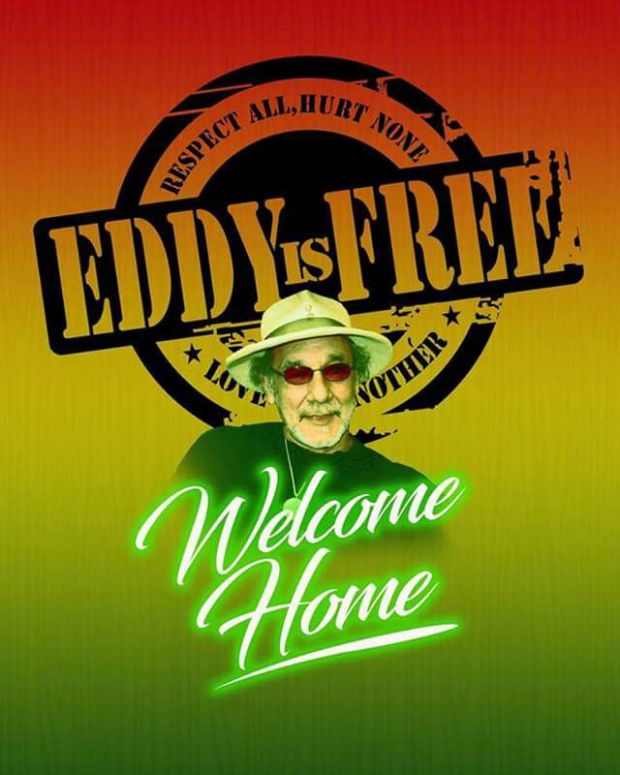 On Wednesday morning, supporters in a large motor home welcomed him outside the gates of Colorado’s Florence Correctional Institution. They then cooked him a hot breakfast of eggs, toast and a pile of fragrant bacon, washed down by a Dr Pepper soda.

Flying first class — with a cane, beard and “rasta hat” — they returned to San Francisco, where he’ll live in a halfway house.

Now that he’s out, he’ll advocate for prison reform, he vowed.

“I’m all for law and order. There are people out there who are murderers and rapists, who deserve to be in prison,” he said. “But I was literally with thousands of men that got caught with ‘ghost dope’ — no physical evidence — that are serving 10, 20 years. It is wrong and needs to be corrected.”

He aches for all that is gone.

“We lost all the church property, our house, cars, the ministry itself. Our members are now spread far and wide,” he said. “More important was the loss of life my (first) wife Linda Senti,” whose cancer returned because of stress, he believes.

His best friend, Jack Herer — “the grandfather of the cannabis movement” — died while he was in prison and Lepp could not attend the memorial service to pay his respects. Also dead are “my grandmother, my mother, two mother-in-laws, and so many friends I can’t list them all.” Also gone from life is his second wife, whom he married and divorced while in prison.

What remains is “the love, respect and support of so very many of  those who believed in what we were trying to do,” he said.  “I would never have survived as well as I have had it not been for that.”

Something else waits for him, too: spreading the message about what he calls “the sacred plant.”

“It is the Tree of Life,” he said, “and I have seen first hand the miracles it can work.”

A Quick, 4-Step Guide to Making Cannabis Tinctures at Home

10 new-ish cannabis terms every stoner should know, from adult-use to solvent-free

A Quick, 4-Step Guide to Making Cannabis Tinctures at Home

10 new-ish cannabis terms every stoner should know, from adult-use to solvent-free