Sonoma County is welcoming a bumper crop of visitors this weekend — coming for weed, instead of wine.

Buoyed by California’s legalization of cannabis, Santa Rosa’s famed Emerald Cup harvest festival — a two-day conference, competition and weed fest — is expecting a crowd of over 23,000 enthusiasts, up from only 6,700 four years ago.

“People are calling from all over the country who want to come and be part of the celebration,” said founder and producer Tim Blake.  All hotels are booked in a 20-mile radius.

From its modest beginnings in Laytonville over a decade ago, the expanding Dec. 10-11 festival is now held at the Sonoma County Fairgrounds setting, with heated tents in case of rain.

It has emerged as the site for the nation’s largest best-grown organic, outdoor cannabis competition.

The number of entries into this prestigious competition — dubbed “the Academy Awards of the cannabis industry” by Rolling Stone magazine — jumped 50 percent this year. About 1,200 samples, up from 850, are awaiting critiques that can make or break a reputation.

That’s almost 100 pounds of weed that must be tried and tested before Sunday’s awards ceremonies, said Blake. He has spent about $300,000 testing all entries at Santa Cruz’s SC Labs, seeking any trace of disqualifying pesticides, bacteria, mold or fungi. 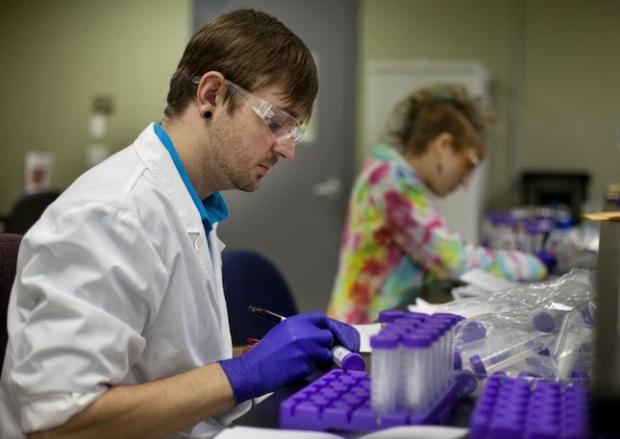 Every entry in the Emerald Cup’s prestigious cannabis testing competition is tested for pesticides and molds at SC Labs, based in Santa Cruz. About 100 pounds of weed have been tested. (Pat Tehan, Bay Area News Group)

Entries are judged on four categories. The first three – “looks, smell and taste” – each hold a maximum of 10 points, while the final category of “effects” gets double that, or up to 20 points, judge Nikki Lastreto wrote in the contest’s blog.  Judges spent a month smoking the entries.

“So what do we look for in the perfect bud? We begin with the looks of course – is she dense or fluffy? Does she have a clean trim, definitely by hand, that defines the shape of the bud? No loose messy buds ever get far. Is she covered in crystals, and what are her color variations? These are just the first of many considerations,” she wrote. “How sticky is it? Is it fruity or fuelly – or is it sweet or savory?”

For those with medical marijuana licenses, the festival features a dedicated “medicating section,” where vendors will offer samples.

No license? No problem. Physicians will be on staff to provide one. (Bring your California government-issued identification.)

The event is not just for stoners. For the first time, the conference will host a panel discussion with regulatory experts: Lori Ajax, Chief of the Bureau of Medical Cannabis Regulation; Brian Lehay, Director of California’s Department of Pesticide Regulation; John Nores, California Department of Fish and Game; Assemblyman Jim Wood, (D-Healdsburg), and Fiona Ma, Chairwoman of the California Board of Equalization.

Other panels will explore topics such as cultivation, the cannabis genome, therapeutics, farm certification and marketing and branding. Over 450 vendors are expected.

Marley will also describe his new “prison-to-pot farm” initiative. In partnership with Ocean Grown Extracts, he paid $4.1 million for the former Claremont Custody Center in Coalinga and is converting the 77,000 square foot former prison into a cannabis grow space.

A pre-festival party is held Friday night, in advance of the festival. The event was conceived in the fall of 2003, recalled Blake, when he and a friend “got to talking about the fact that Mendocino had the best bud on the planet, but no form of acknowledgment or celebration about it.”

“That was when it was still very iffy to be out front about having a public competition,” he said, in a prepared statement. “We put out no press, just some last minute posters, word of mouth, and 23 entries into the ganja contest came forward.”

“Now, it is enormous,” he said. “It’s because people want to be part of this.”